Nigeria international Alex Iwobi not in action as Arsenal defeated Bate Borisov 6-0 in their final Europa League group game at the Emirates Stadium on Thursday night.

The Gunners finished top of the group with 13 points.

At the Yaakov Turner Toto Stadium, Super Eagles forward Anthony Nwakeme was also not listed for action as his Israeli team Hapoel Be’er Sheva crashed out of the competition following a 2-0 defeat against Czech Republic club Victoria Plzen.

His compatriot John Ogu was on the bench for the entire duration of the game.

Former Nigeria junior international Alhaji Gero saw action for 46 minutes as his Swedish club Oekstrands made it to the round of 32 courtesy of a 1-1 draw against Hertha Berlin.

Ezekiel’s countryman Friday Eze however made it to the bench in the game.

Zulte Waregem had no hope of progressing to the next round prior to the game and finished in third position. 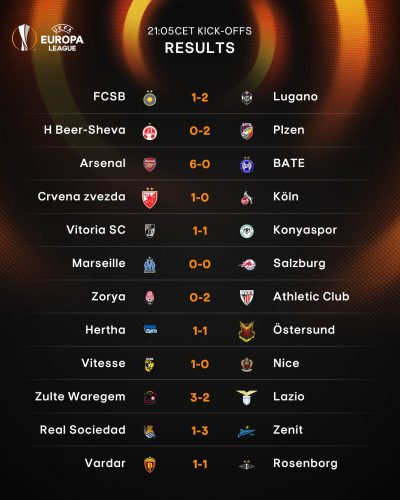