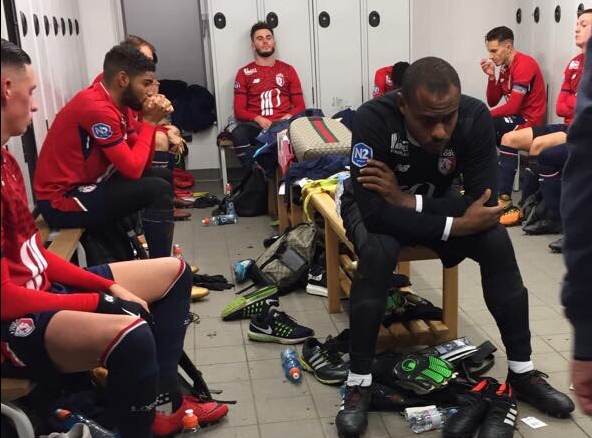 Former Super Eagles captain, Vincent Enyeama, made a return to action for the first time in over seven months on Saturday for Lille’s U-18s in their 3-1 win over Croix in the French fourth tier, Completesportsnigeria.com reports.

Enyeama sustained a knee injury while playing for Lille in April, and it took close to eight months for him to fight his way back to full fitness after undergoing surgery.

He posted a picture of himself after the game in his team’s dressing room with a message of gratitude beneath it on his Twitter handle.

“God has been so faithful. 7 months and some weeks,God has taken me up. I had my 1st game.I want to thank everyone that worked for this day to happen.God bless you all,” the 35-year-old Nigeria’s most capped international wrote.

Maxime Wackers and Alexis Flips were on target to secure a third win of the season for Lille’s U-18s on Saturday night.

Lille’s U-18 are currently tenth in the table with 14 points from 13 games.

Enyeama, who retired from international football in 2015 after falling out with then Super Eagles coach Sunday Oliseh, has made 143 Ligue 1 appearances for Lille, keeping 61 clean sheets and conceding 132 goals in four seasons.

Enyeama’s return to action comes amid calls for his return to the Super Eagles squad ahead of the 2018 World Cup squad in Russia next summer.

Carl Ikeme, the Wolverhampton Wanderers goalkeeper who competently replaced Enyeama as first choice, was diagnosed with leukaemia in August and the trio of Daniel Akpeyi, Ikechukwu Ezenwa and Francis Uzoho have not been totally convincing.