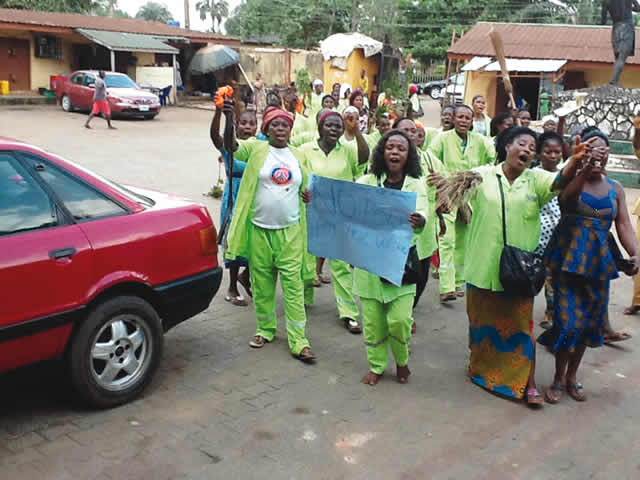 Street sweepers engaged by the Edo State Waste Management Board, under a public-private partnership arrangement, have staged another protest over the non-payment of their outstanding salaries.

The protesters, who abandoned their morning duties, lamented that the state government had failed to pay their entitlements spanning seven months.

Armed with placards, the aggrieved workers marched through Kings Square, Akpakpava Road, and made a stopover at the press centre of the Nigerian Union of Journalists before heading for the Government House in Benin.

The street sweepers had on November 2 taken to the streets to protest against the non-payment of their seven-month salary arrears.

One of them, Aigbe Jerry, alleged that the affected workers had been disengaged on the excuse that the job had been given to State Employment and Expenditure for Results (SEEFOR), an initiative for empowerment.

Jerry wondered why the arrears had not beenpaid in spite of the assurance given by the state government.

He said, “The Deputy Governor, Mr. Philip Shaibu, who spoke to us during the last protest, promised us that we would be paid in the second week of the month of November.

“Now, November has come and gone; no payment. But on December 1, we went to our office and we did not see our manager. We were later told that the work has been given to SEEFOR. But the government should pay us our money.”

He lamented that some female workers, who recently put to bed, were still at hospitals because they could not pay hospital bills, while landlords had threatened to evict some of them for not being able to pay house rents.

Another protester, Helen Jamiu, appealed to the state government to pay the outstanding salaries, saying she was at the risk of losing her accommodation.

But while receiving the protesters, the deputy governor appealed for patience, adding that the issues leading to the delay in the payment of their salaries were being resolved.

Shaibu said the Secretary to the State Government, Mr. Osarodion Ogie, had met with all the contractors of the state waste management agency to address the issues.

“The government is planning a better PPP to keep the state clean in a manner that would be beneficial to your welfare,” he added.

However, Governor Godwin Obaseki said the state was not indebted to street cleaners and sweepers.

Obaseki, in a statement by his Special Adviser on Media and Communication Strategy, Mr. Crusoe Osagie, said, “The street sweepers are not the employees of the Edo State Government. They are hired by contractors to the state government whose duty it is to pay their wages.”