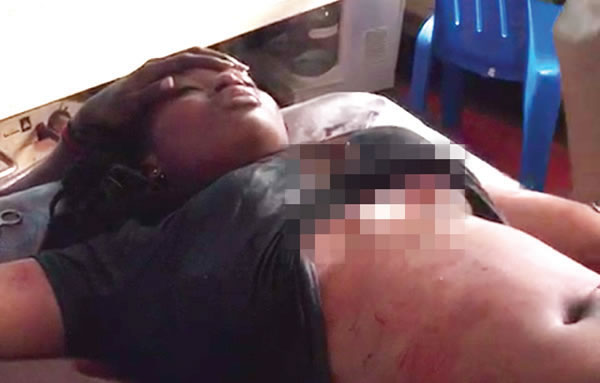 A policeman attached to the Igbuzo Police Division, identified simply as Sergeant Abua, is allegedly on the run after shooting a student at the Delta State Polytechnic, Sofia Ogogo, and a civil servant, Victor Emeagwai, at a checkpoint in the community.

The victims were in a Toyota Corolla, driven by an estate agent, Jerry Akinlabi, when the incident happened. Ogogo and Emeagwai are Akinlabi’s girlfriend and friend respectively.

PUNCH Metro learnt that a team of five policemen, including Abua, had flagged down Ogogo at a checkpoint along Igbuzo Market.

One of the policemen, identified as Nwokolo, was said to have demanded money from Akinlabi and the driver told him that he did not have N200 to give him.

Nwokolo reportedly said he would take one of the N1,000 notes Jerry had on him.

As Akinlabi drove off from the checkpoint, Abua reportedly shot at the car and bullets pierced the back of the vehicle, hitting Ogogo, who sat at the back seat.

The bullet also grazed the back of Emeagwai, who was at the passenger’s seat.

Akinlabi told our correspondent that four cops, including the team leader, one ASP Akhabue, were detained by the police, while Abua evaded arrest.

He said, “On Sunday, November 17, 2017, I was driving to the Igbuzor Market and on getting to a checkpoint, I met the policemen. We knew one another some months ago when I had an issue concerning a property at the station. I sounded the horn to greet them, but they did not respond.

“One of them used his gun to hit the boot and I reversed. He said I wanted to beat the checkpoint. I told him that I assumed that they knew me very well and apologised. He demanded money. I wanted to give him N100 or N200, but it was N1,000 notes I had on me and I explained to him.

“A bullet pierced into the car, hit my girlfriend’s body, came out and hit my friend in the back.”

The 22-year-old indigene of Oyo State said he took the victims to a general hospital in Igbuzo, from where Ogogo was referred to the Federal Medical Centre, Asaba.

He said he called a senior police officer at Asaba who notified the state Commissioner of Police of the incident.

He said, “The CP and the DPO of the Igbozo Police Station came to the FMC and deposited N100,000, but I have spent much more than that. Meanwhile, the policeman who shot at us had gone to drop the gun at the station and fled.  The other four policemen were detained at the command headquarters. My friend and I wrote our statements there.”

Akinlabi explained that a police officer asked him to drop his car key to aid investigation. He added that he handed over the car key, but activated the steering lock because he suspected foul play.

He said he met with the Assistant Inspector-General of Police, Zone 5, Benin, Edo State, who assigned a policeman to take his statement, adding that the policeman came down to the police command, Asaba, the following day.

“As I was returning from Zone 5 on Monday, I received a call from the Investigating Police Officer at the police headquarters in Asaba and he asked for the steering key. The IPO and a policeman came down to the hospital and I told them I would have to look for the key when I got home.

“The policeman sent from Zone 5 invited my friend to the police headquarters in Asaba to write his statement too. When he got there, he saw some policemen moving the car. He called to ask me if I gave them the key to unlock the steering and I said no. When I called the IPO, he confirmed what my friend said and he told me that there was no cause for alarm.”

He said the command returned his car washed, with the bullet holes on the vehicle covered and painted, lamenting that he had not heard from the command and zone 5.

Akinlabi’s girlfriend, Ogogo, who spoke to PUNCH Metro from the hospital, said she was on the telephone when the bullet hit her.

“That was the last thing I remembered until I found myself at the hospital,” she added.

Emeagwai urged the police authorities not to sweep the case under the carpet, saying the policemen must be punished.

He said, “I don’t see any reason for the shooting. I have been going to the FMC to treat the gunshot injury for about three weeks now. The policemen should not go scot-free.”

Harrison Gwamnishu, the Coordinator of Behind Bars, a rights group, which Akinlabi contacted on the matter, said the group would institute a legal action against the police.

He said, “We want to charge the case to court as a civil matter. It is barbaric. Why did the police wash the bloodstains in the car and covered the bullet holes without the consent of the owner?”

The Delta State Police Public Relations Officer, DSP Andrew Aniamaka, said the policemen would be brought to book if found culpable after investigation.

He said, “The case is being investigated. However, our utmost concern is that the injured victim gets proper treatment. The Area Commander and the DPO of the division in question are involved in the matter.

“The case is being investigated by Zone 5. Where somebody is absent from duty for 21 days without any reason, we declare such a person a deserter. So, there is no anxiety that the policeman is on the run. Rest assured that the right thing will be done.”