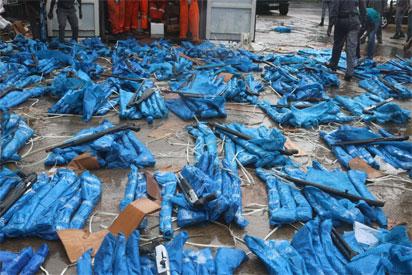 According to Superintendent of Customs, Patrick Onyemem who supervised the destruction on Wednesday, the product has a Duty Paid Value (DPV) of N10 million.

Onyemem said that the consignment was intercepted by the operatives of the FOU on the Benin-Okada expressway as it was being smuggled into the state.

He also said that the consignment was being conveyed in a Mercedes Actross with registration number KTU26LG when it was intercepted.

He further said that the destruction was carried out in compliance with the Federal Government’s directive and policy on importation of frozen products which included turkey and chicken.

Newsmen report that the destruction was done at the Custom’s outstation, Edo/Delta Command, and was witnessed by officials of the Service, NAFDAC, Police, NSCDC, Army, the defendants and newsmen.

Newsmen recall that on Monday, a similar exercise was carried out on 480 cartons of seized poultry products valued at N7.2 million.