By James Agberebi:
The Super Sand Eagles of Nigeria recorded their second win at the 2017 COPA Lagos Beach Soccer tournament with a hard-fought 9-8 victory against Lebanon in the final game of matchday two at the Eko Atlantic City, Lagos on Saturday.

It was a game that went back and forth with no clear favourite as both teams were evenly matched.

After a thrilling first period, the two teams went into the break with the score at 3-3.

The second period saw the Sand Eagles edge it 6-5 going into the third and final period.

And in the final period, it was neck and neck but the Sand Eagles eventually found the resolve to score the winning goal to claim victory. 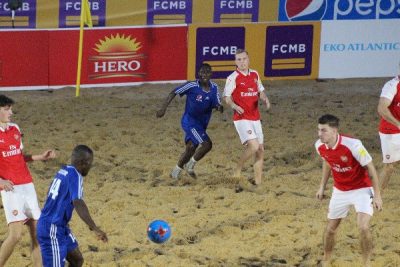 In the game that preceded the Sand Eagles versus Lebanon clash, Pepsi Football Academy stunned Arsenal beach soccer team 3-2 to record their first win of the tournament.

The tournament ends on Sunday with the Super Sand Eagles taking on Spain and Morocco facing Lebanon.