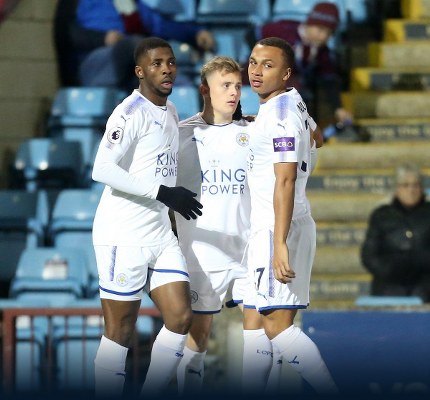 By James Agberebi:
Super Eagles forward Kelechi Iheanacho was in action for Leicester City’s U-21s who defeated League One club Scunthorpe 2-1 away in round two of the 2017/2018 English Football League (EFL) Trophy also known as the Checkatrade Trophy on Tuesday.

The Checkatrade Trophy is a knock-out tournament for English football clubs in League One and League Two of the English football system, and including 16 Premier League and Championship “B Teams” with Category One status after the previous season’s trial format was extended.

Iheanacho lined up alongside other senior Leicester players like Daniel Amartey of Ghana, Tunisa’s Yohan Benalouane, Aleksandar Dragović of Austria and Leonardo Ulloa of Argentina.

Leicester got off to the perfect start through George Thomas in the third minute.

In the 21st minute, Leicester doubled their lead this time through Sam Hughes to make it 2-1.

Scunthorpe pulled a goal back thanks to Kevin Van Veen in the 46th minute but Leicester held on to advance into round three which is the round of 16.

Iheanacho almost gave Leicester the lead just 20 seconds into the game but failed to finish off Ulloa’s headed assist.