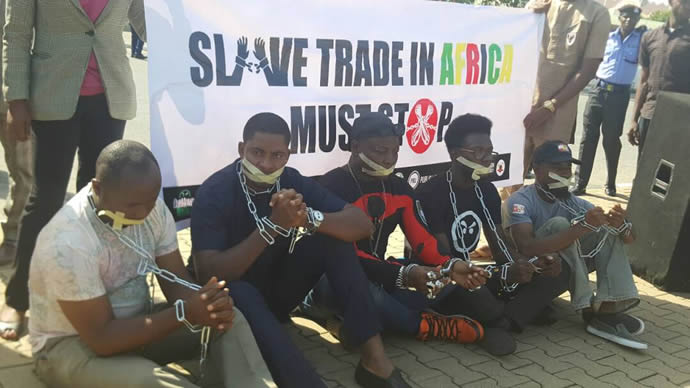 Veteran musician and leader of the #OurMumuDonDo Movement, Charles Oputa, aka Charly Boy, on Monday led a protest against the reported slave trade going on in Libya, where Nigerians are said to be among the thousand of victims.

Charly Boy and other protesters appeared at the Ministry of Foreign Affairs’ head office in Abuja with hands chained and mouths sealed.

Libya returnees had spoken of their experiences in the war-torn North African country, with several reporting they were sold as slaves.

The group’s spokesman, Raphael Adebayo, said they wanted the government to take proactive and reactive steps over the plight of Nigerians sold as slaves in Libya.

“Our message to the Federal Government today is very simple and clear that issuing press statement is not enough to give respite to Nigerians who are suffering in Libya.

“Concocting and fabricating phone numbers are not enough to give respite to the Nigerians suffering in Libya.

“What we demand is decisive and genuine action to be taken to repatriate Nigerians who are in Libya and give them a reason to want to be Nigerians.

“We hope that they are going to act on these demands of ours,” Adebayo said.

Last week, Charly Boy led a protest to the Libyan Embassy to register the group’s displeasure over the alleged inhuman treatment of Nigerians by the Libyan authorities.