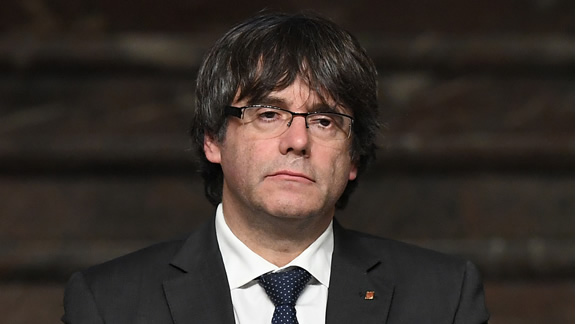 Axed Catalan separatist leader Carles Puigdemont faces an extradition hearing in Belgium on Monday as Spain seeks to have him sent back to face sedition charges over his region’s independence drive.

A judge sitting behind closed doors in Brussels will hear from lawyers for Puigdemont and four of his former ministers, who all fled to Belgium in October despite a summons to appear in court in Spain, claiming they would not get a fair trial.

Prosecutors last month asked the judge to approve the European arrest warrant issued by Madrid for the five in the opening round of what could become a protracted courtroom battle.

Monday’s hearing comes on the eve of the official start of campaigning for December 21 elections in Catalonia, ordered by Madrid to “restore normality” to the wealthy northeastern region, which declared independence unilaterally following a hotly disputed October 1 referendum.

Puigdemont’s lawyer said at the weekend he will remain in Belgium until after the elections.

“No matter what, they will be (in Brussels) till at least December 21 and according to my calculations this could go on till mid-January,” lawyer Jaume Alonso Cuevillas told Catalan radio Rac1, referring to Puigdemont and the four former ministers.

“I am convinced that no matter what happens they will have recourse to an appeal,” the lawyer said.

Spanish prosecutors want to prosecute Puigdemont and his former ministers for rebellion — which carries a maximum 30-year jail sentence — and sedition for holding the referendum, which was declared illegal and unconstitutional by the courts, as well as for misusing public funds.

Meanwhile a Spanish Supreme Court judge is set to decide whether or not to free 10 other separatist leaders who were jailed pending a probe into their role in the Catalan independence drive.

Any release on bail would mark a turn in the election campaign, particularly for separatist parties who have repeatedly accused Madrid of taking “political prisoners” and “repression” after their attempt to declare unilateral independence fell flat.

Puigdemont and his cadres say the charges against them are politically motivated and as both sides are likely to appeal if the judge rules against them in the extradition hearing, the case could drag on for months, according to the Belgian justice minister.

Christophe Marchand, lawyer for two of Puigdemont’s ex-ministers, told AFP that “the facts as written in the arrest warrant are not punishable under Belgian law”, saying the case was an attempt to punish a “political process that passed off peacefully”.

After Monday’s hearing the court is expected to make its ruling in eight to 10 days, according to the Brussels prosecutor’s office.

A spokesman for Puigdemont said Friday he would “respect the schedule” of the Belgian legal process.