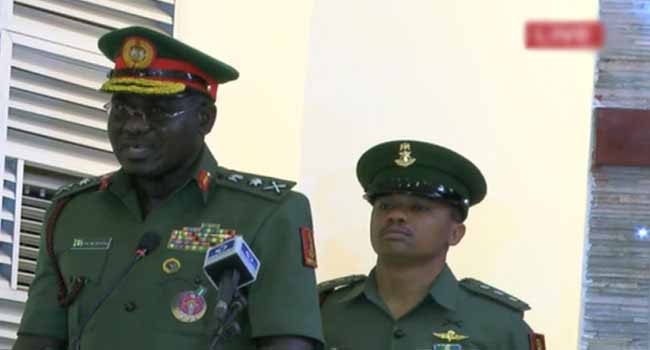 The Chief Of Army Staff, Lieutenant-General Tukur Buratai has called for an enhanced cooperation to effectively rout out insurgency and other crimes confronting the lake chad basin.

He stated this on Monday during the Chief of Army Staff Annual Conference in Ibadan, the Oyo State capital.

The COAS noted that tremendous successes have been recorded in the war against terror; he, however, called for more support.

“The scourge of cross-border crimes like human and small arms trafficking, drugs peddling, smuggling, banditry, cyber threats, money laundering, espionage, terrorism and many others have created an interest for non-state actors that must be decimated by combined international efforts,” he said.

Buratai also commended President Muhammadu Buhari for partnering with the international community in confronting challenges in the country.

This, according to him is visible in the successes recorded by the Multi-National Joint Task Force in routing out crimes from the North-East region.

“The Nigerian Army leadership in concert with the grand strategic focus of Mr President has continued to devise means of engaging with other countries, especially our neighbouring countries towards tackling common traits in other to meet considerable international obligations for the overall promotion of global peace and security.”

Operations Rawan Kada and Deep Punch I and II, according to the military chief were launched in the first quarter of 2017.

These, he said helped the military to destroy terrorists’ strongholds and rescue abductees of the Boko Haram insurgency in the north-east.