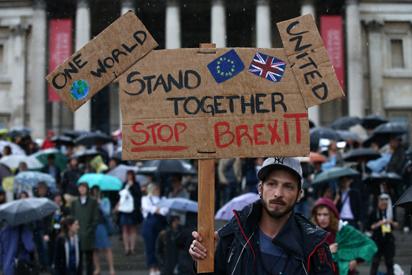 Scotland’s nationalist leader accused the British government on Thursday of being “totally and utterly incompetent” on Brexit, saying the current situation showed that Scotland should be independent.

“This week, this Tory UK Government — strictly speaking, it’s a Tory/DUP UK government — has been shown to be dissembling, mendacious and totally and utterly incompetent,” First Minister Nicola Sturgeon said at a Scottish parliament session in Edinburgh.

British Prime Minister Theresa May was close to striking a deal on the Irish border with European Commission president Jean-Claude Juncker on Monday, until Northern Ireland’s Democratic Unionist Party (DUP) expressed its opposition.

The DUP keeps May in power after she lost her majority in a general election in June, giving it disproportionate influence over the government.

Willie Rennie, leader of the Scottish Liberal Democrats, urged Sturgeon to use her influence to build momentum for a second Brexit referendum, claiming that London Mayor Sadiq Khan “is on side”.

Sturgeon said the Liberal Democrats, who oppose a second Scottish independence referendum, were being “selective” in their support for referendum reruns.

She said that the case for a second Brexit referendum might one day “become difficult to resist”, but that the immediate priority was to convince the British parliament of the need to keep Britain in the European single market and customs union.

But she said “the real lesson” of the past week was that Scotland “will always be at the mercy of reckless decisions taken by Tory governments at Westminster” unless it became independent.

“The sooner we are in control over our own future here in Scotland the better, and this week has proved it,” she said.

Scotland voted in favour of staying a part of Britain by 55 percent in a 2014 referendum, and voted to remain in the European Union by 62 percent in 2016.

The most recent polls suggests support for independence has risen to 47 percent, and support for remaining in the EU is up to 68 percent.