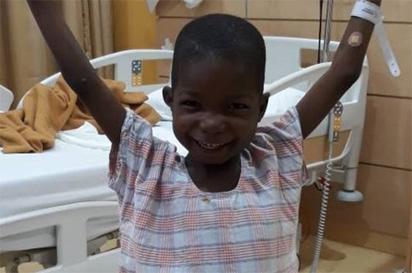 WE join millions of Nigerians of goodwill to welcome back Master Ali Ahmadu, the six year-old little boy crippled when motorcycles ridden by Boko Haram Islamic insurgents broke his spine in Chibok. He was wheeled into an aircraft three months ago but returned from Dubai, the United Arab Emirates (UAE) on Monday this week striding confidently and happily.

Ali flashed the victory salute as he was emotionally received by family members and well wishers at the Nnamdi Azikiwe International Airport, Abuja, accompanied by his aunt, Hannatu Madu, the Coordinator of the Global Initiative for Peace, Love and Care (GIPLC), Nuhu Kwajafa and representatives of the Dickens Sanomi Foundation, which bankrolled the medical charity.

It was a miraculous recovery because Ali had languished on a wheelchair for four years. If help had not come from the Foundation, whose founder Mr Igho Sanomi, the proprietor of the Taleveras Group, committed $48,000 or over N17 million to restore hope and full value to the little Chibok Boy, he would have been crippled for life.

We are further overjoyed by the undertaking by the Taleveras Group to sponsor Ali’s education up to university level, thus giving full credence to the dictum that anything worth doing is worth doing well. With these gestures, the Sanomi Foundation has demonstrated, once again, that among the many moneybags in Nigeria, there are still some who have positioned themselves as God’s agents on earth willing to make a difference in the lives of those who would otherwise have been dumped as though they were human trash.

We salute this inspirational story, and call on Nigerians to extend this spirit of love, empathy and care to fellow citizens in distress without minding their ethnic, religious, regional or creed colorations. This is the only spirit that can re-humanise Nigeria and lump us together as people of one nation bound by one love, one destiny and one God. It is a pleasant and sobering irony that an innocent boy heartlessly rendered destitute by evil-minded terrorists from his own part of the country has his full humanity restored by a selfless patriot from another part. This confirms that our common humanity can be stronger than our mere primordial differences. It is this sort of gesture that people can look at and glorify God.

While recommending this gesture to all Nigerians, we call on the Federal and State Governments to give more serious though to the need to make our healthcare system better.

It is a shame that we have to spend millions of naira to take serious health challenges such as Boy Ali Ahmadu’s to former fellow Third World countries which have now become world pacesetters because their leaders chose to lead well rather than stuff their pockets with public resources.