The book takes a firm and foundational account of the seeming intractable menace of conflicts in Nigeria.  Written by Chuba B. Keshi, D.Phil, PhD, Principal Partner, 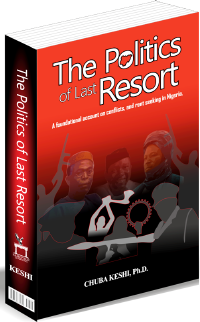 Core Business Konsulting (CBK) Associates, it examines the subject in varied ramifications and draws a parallel between the absence of common trust and the presence of the parochial group and self, in otherwise platforms of commonwealth. It relates a visible culture of silence in the wake of an order of patrimonial patronages to some form of cold conflict that further broadens the social distance among its peoples.

From a historical perspective, the 310-page-work traces the character and content of conflicts in Nigeria to the very faulty colonial fabrics that created the Nigerian state. It concludes that until there is a total restructuring in line with each Nigerian people’s pre-colonial culture antecedents, the country will continue to drift along the lines of underdevelopment and uncertainty.

In its preface, Keshi writes: “What I have attempted to do in this book is to revisit the position of the argument I made in 2003 and to expatiate on it. This is by providing theoretical foundations, historical and empirical evidence; a scientific explanation, for the issues observed in that report, using a political economy approach. I also tried to establish a correlation between the self-seeking character of present day conflicts and a life style of kleptomania, particularly Prebendalism by office holders in the machinery of state.

It is important to point out that this account holds colonialism not just complicit, but the most culprit in the conspiracy that created the state of Nigeria in its present form, content and character.”

This work, he insists, is a contribution toward resolving the political and social melancholies that have severely undermined Nigeria for decades, and have continued to reinforce her underdevelopment