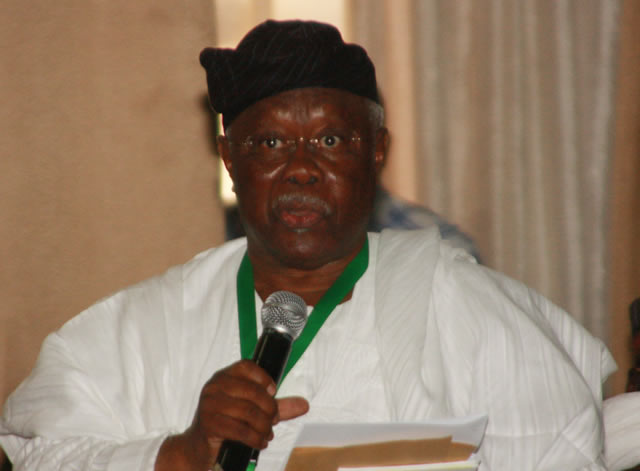 A former Deputy National Chairman of the Peoples Democratic Party, Chief Bode George, on Friday announced his withdrawal from the race for the national chairmanship of the party.

He also lambasted Governor Nyesom Wike of Rivers State for saying the people of the South-West did not deserve to produce the chairman of the party.

George, who said he did not withdraw for any candidate, told one of our correspondents during an interview on Friday evening that he would not be participating in the congress on Saturday (today) as it was obvious that the event would be a charade. While speaking at the headquarters of his campaign office in Maitama District of Abuja, George, flanked by his supporters, said it was wrong for the party not to “micro-zone” the office of the national chairman, as against the zoning principle reinforced in Port Harcourt last year.

He said, “The party has lost its soul. It has lost its principled beginning and the predications of righteousness. It has traded the finer principles of democratic guidance and equity for the squalid, dirty and shameful resort to mercenary agenda, where nothing matters save the putrid, oafish gains of the moment.

“I cannot be part of this screaming aberration. And as the Atona of Yorubaland, I do not expect any well-meaning, well disciplined, forthright, sincere Omoluabi of Yorubaland to continue with this deceit and shameful theatre.

“The Peoples Democratic Party has now mangled and distorted its soul and spirit. There is no morality here anymore. There is no sanity or any sense of enlightened civility.

“As a result of these observed aberrations wherein the position of the National Chairman has been apparently sold and auctioned to the highest bidder, I as an Omoluabi and as an authentic Atona of Yorubaland, I will not partake in this charade.

“I hereby withdraw from this brazen fraud and absolutely preconceived, monetised, mercantilist convention.”

While describing Wike’s comments as unfortunate, George argued that without any meaningful position, the South-West, which played a huge role in the victory of President Muhammadu Buhari in 2015, would not be eager to support the PDP in 2019.

He said, “I have removed myself from the charade but I did not step down for any individual. Governor Wike insulted the South-West badly today. What does he take the Yoruba people for?

“He said there is no micro-zoning and then went ahead to say we have nothing to bring to the table. How do you want the Yoruba people to feel?

“He implied that the South-West is not an important zone and that we should play second fiddle. It is not fair at all. I will not be going to the congress.

“We have been spending so much money campaigning all over the country. What do we tell our people when we return home? That the South-West didn’t get it because we are not considered important?”

He therefore called on Wike to apologise to the Yoruba over his comments.

Wike had said the South-West geopolitical zone did not deserve to produce the next chairman of the Peoples Democratic Party because the zone had no leader who could restore calm to the party.

Wike, who said the current crisis in the PDP emanated from the South-West, argued that the South-South zone, which is largely ruled by the PDP, deserves to produce the chairman in today’s national congress.

The governor said this during a Channels Television programme, ‘Sunrise Daily’, on Friday.

The governor said, “The problem that the PDP has today arose from the South-West. Look at the crisis! Mention one chairman that you will vote today in the South-West that will stabilise the party. Take for example, Tunde Adeniran. If you vote him in, then that will be the beginning of the crisis of the PDP in Ekiti State.”