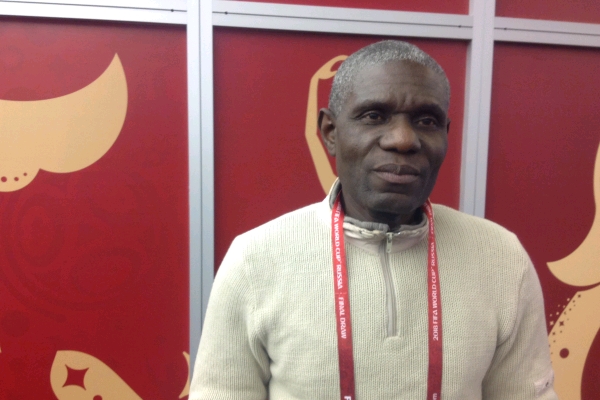 Dominique Dongo is a Belgian journalist who attended the 2018 FIFA World Cup Final Draw in Moscow on December 1, 2017. On the sidelines of the Draw, Dongo sat down with KAYODE OGUNDARE to answer football-related questions and gave reasons why he is convinced Nigeria’s Super Eagles will make Africa proud at the next World Cup…

Dominque, it’s nice to meet you. Can you introduce yourself to our readers?

I’m Dominique Koublan Dongo from Radio Belgium and I also report for Happy FM 98.9 Accra, Ghana. I’m happy to be here at the Final Draw of the 2018 FIFA World Cup for Belgium.

How come you’re here for Belgium since you said you’re Ivorien?

I’m a Belgian by naturalization, though I’m originally from Ivory Coast. I have lived in Belgium for over 20 years and settled down to life there. So, as a journalist, if my country has qualified, it is my professional duty to be here to cover the draw for my organization. I was around in 2015 in St. Petersburg for the preliminary draw and I’m here again for the Final Draw. Everything being equal, I will be around in June next year for the competition proper.

I think this is the most talented Belgian side I have seen. I don’t know if they’re the best ever but since I’ve been in the country, we haven’t had anything close to this. The sheer number and quality is intimidating. You see quality all over the pitch. If they’re not the best ever, then they must be very close.

Realistically, what are the chances of Belgium winning the World Cup?

I think this is our best chance of winning the World Cup. We have players playing in big teams and they are also at the top of their games too. Look around the Premier League, for instance, and you’ll see Belgian players doing excellently well. We can easily raise a quality team for Belgium from the players in the English Premier League alone and that is not an exaggeration. Elsewhere in Portugal, Spain and even at home we have lots of players doing well. However, having good players alone doesn’t win competitions. We saw that at the European Championships last year in France. If you don’t take your chances and the opponents do, then you are out of the competition before you know what has hit you. There’s no logic in football. We stand a very very good chance of winning the World Cup yet we could get knocked out in the first round. That’s football.

Okay, now that your native Cote d’Ivoire failed to qualify for the World Cup, which African team will you be supporting in Russia 2018 and why?

It is Nigeria and that’s because I believe they have the pedigree to do better than any of the other teams. If you notice in their appearances at the World Cup, they always put up a credible performance that makes you proud to be African. After the era of the late Stephen Keshi and others, the fortunes of the team dropped considerably but now they are on the ascendancy again. They have young and exciting players who play as equals on the pitch. No superstar unlike before when you can mention one or two players like Jay Jay Okocha, Daniel Amokachi, Rashidi Yekini and others. Now, all of them are stars and they help the team in their own little ways. Apart from Mikel, who’s the captain and maybe Victor Moses, the players are not big names like that and this is good in my opinion. The team will pivot around Mikel who has the talent and experience to carry them in difficult moments. All I ask of Mikel is that he should learn to play forward rather than passing backwards or sideways like he did in Chelsea. If he’s able to lead the line, the players will rally round him and anything can happen. I think Nigeria stands a good chance of going beyond the quarter-finals if they prepare well, no in-fighting and officiating is fair.

Finally, how do you feel that your native country Cote d’Ivoire’s flag will not be flown at the Russia 2018 World Cup?

Really I feel sad but, realistically, do we deserve to be here? I knew we were not going to qualify. Since we won AFCON in 2015, the team had been on a freefall and even that AFCON victory against Ghana on penalties was sheer luck. We shouldn’t be waiting on luck to beat teams given the quality of players we have. But the rot was not checked and that was what culminated in our inability to qualify for the World Cup. The crop of players that we have now may play in big clubs but they lack the heart to sweat and suffer for national pride.