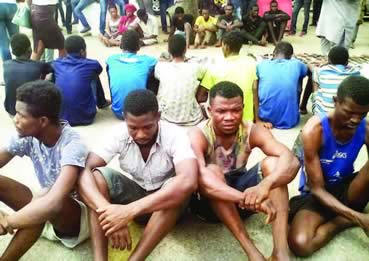 The Lagos State Police Command has arrested two suspected members of a ritual cult, Badoo, in connection with the killing of a woman, Beatrice Alaba, and her son, David, at Temu village, in the Agbowa area of the state.

The command stated that two other suspects were apprehended for the murder of a pastor in the Fingers of God Parish of the Redeemed Christian Church of God, Victor Kanayo, in the Igbogbo area of Ikorodu, Lagos State.

PUNCH Metro had reported that the Badoo gang brutally killed the woman and her son on November 21, 2017, inflicting a serious injury on the woman’s daughter, Rachael.

On November 25, assailants suspected to be members of the cult, reportedly stormed the RCCG pastor’s residence, crushed him to death with a stone, and left his wife and child injured.

The attack reportedly occurred shortly after the state Commissioner of Police, Edgal Imohimi, held a meeting with security operatives, community and religious leaders at the palace of the Ikorodu monarch, Oba Abdulrasheed Shotobi, from 10pm to 1am.

During a press briefing on Monday at the command headquarters in Ikeja, Imohimi said the suspects were arrested after “painstaking investigations.”

He said, “I visited the scene of the first crime at Temu village, Agbowa, in company with the Officer-in-Charge of the Special Anti-Robbery Squad, and other officers to conduct investigation and look for clues.

“At the scene of crime, the following observations were made: the criminals gained entry into the woman’s room by carefully removing the louvers in the window. The assailants used a concrete stone to smash the deceased’s skulls.

“In the course of investigation, which was covert and intensive, one Abdulrasaq Yahaya and one Abubakar Tenimu, from Ikorodu, were arrested in connection with the crime. A Nokia phone and a SIM card which belonged to the deceased woman and stolen from the scene of crime, were recovered from them.

“Also, two suspects have been arrested in connection with the murder of one Pastor Victor of the Redeemed Christian Church of God. The four assailants made away with the pastor’s phone after killing him. The phone and the SIM card have been recovered from the two suspects, whose names are Ibrahim Aniwofoshe, 27, and Uche Igwe, 22, both of Aremu Street, Ojota.”

The CP noted that the suspects had made confessional statements and were assisting the police in their investigation.

“I want to appeal to people that we must not glorify the activities of this group by giving them any special name. They are hoodlums and murderers,” he added.

Journalists were, however, not allowed to speak to the suspects, as they were quickly taken away after the briefing.

Meanwhile, Imohimi said the command also intercepted a container conveying a drug concealed in a bag.

He said a laboratory test conducted on the substance revealed that it tested positive for cocaine, with a street value of N250m.

“Based on credible intelligence, the command intercepted a 20-foot container with number 28023414 and bill of laden number 5313831929. For security reasons, I will not mention where that container was intercepted since the investigation is still ongoing,” he added.