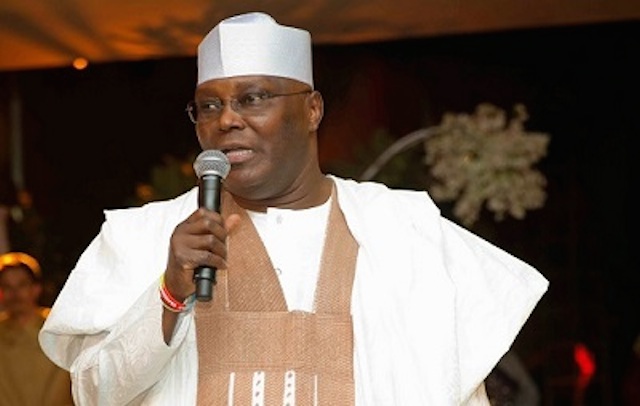 The Peoples Democratic Party has said former Vice-President Atiku Abubakar will not vote at its December 9 national convention, which holds at the Eagle Square, Abuja.

It says this is because of the provision of the party’s constitution that deals with new entrants into the party.

However, the party said Atiku would be allowed to speak at the convention.

The Publicity Secretary of the National Caretaker Committee of the PDP, Dayo Adeyeye, who spoke with journalists at a press briefing in Abuja on Wednesday, said the party’s constitution should be used as a guide on the issue.

“All you need to do is pick up the constitution of the party and see whether Atiku is qualified to vote or not,” Adeyeye stated.

When pressed further, he said, “First of all, I can tell you that we are happy with Atiku coming back to the PDP. It is very exciting for all of us. It is a good omen to everybody in the PDP.

“He was one of the founding fathers, one of those who built this party and he is coming back home. His room was never occupied, so we have opened it for him.

Chapter 2 (Part 1) of the party’s constitution deals with admission of members into the party.

On Procedure for rejoining, Sections 8 and 9 explain, “A person, who desires to rejoin the party after leaving it shall apply to his Ward Secretary for re-admission; and unless given a waiver by the National Working Committee, he willbe placed on probation for a period of not less than one year.

“Subject to the provision of Section 8(b), a member on probation shall have the right to attend all meetings of the party, but shall not be entitled to vote at such meetings, nor shall he be eligible to contest elective office on the platform of the party.”

One of our correspondents gathered that the party was planning to amend the above sections at the convention.

The expected amendment will place returnees on six months probation before they could contest any position or be voted for.

Atiku, who was a foundation member of the party, defected to the All Progressives Congress in 2014, claiming that the then opposition party would be his “last bus stop.”

However, he left the APC about a week ago, and returned to the PDP on Sunday.

Meanwhile, Adeyeye has alleged that some agents of the Federal Government were planning to disrupt the party’s national convention.

He said the former ruling party had what he described as credible information that some overzealous elements in the government were planning to disrupt the convention.

Stating that there was nothing to show that President Muhammadu Buhari was part of the plot, the spokesman pleaded with the President to intervene and caution the unnamed aides.

Adeyeye added, “They have been trying every effort but we are happy that we have no information that it is coming from the very top.

“But some overzealous elements in the administration are bent on disrupting it. It is very credible information. They are doing everything possible to make sure that this convention is disrupted.

“They are afraid that if the PDP should hold a successful convention, that their days in government are numbered.

“By the time we hold this convention and our officers are elected and they take offices next year, there will be a floodgate of people even from the APC to the PDP.

“This is credible information and that is why we are appealing to President Buhari to please rein in his aides. We have evidence that the President is aware of this.

“It is happening and we are calling on him to do his own investigation and to call those who are trying to cause this problem to desist because it is capable not only of destroying this democracy but also capable of destroying the country.”

In another development, the Chairman of the Convention Planning Committee, who is also the Governor of Delta State, Dr. Ifeanyi Okowa, has summoned all the 37 state chairmen of the party to an emergency meeting.

The meeting, which will hold in Abuja on Friday, it was gathered, would enable Okowa to discuss the delegates’ list.

There are rumours that some persons are planning to tamper with the list.

Adeyeye, however, said there was no truth in the allegation, stating that the list would be made available to each aspirant at least 48 hours before the convention.

Also, the Board of Trustees of the PDP said all the eight national chairmanship aspirants of the party must be allowed to test their popularity at the national convention on Saturday.

It stated that it would be impossible to zone the office of the national chairman of the party to any section of the country.

The Chairman of the BoT, Senator Walid Jibrin, stated this at a press briefing in Abuja on Wednesday.

Jibrin stressed that all the nine chairmanship aspirants should be allowed to face the delegates, who, he reckoned, would determine who to choose.

Those who have indicated their interest to run for the office of the national chairman are Olabode George, Uche Secondus, Gbenga Daniel, Jimi Agbaje, Rashidi Ladoja, Taoheed Adedoja, Tunde Adeniran, Raymond Dokpesi and Segun Adeyemi.

Some of the aspirants were screened by a committee, headed by a former PDP governorship candidate in Edo State, Mr. Osagie Ize-Iyamu, in Abuja on Wednesday.

Out of the nine aspirants, only two are not from the South-West.

They are Secondus and Dokpesi, who are from the South-South.

Jibrin added, “The BoT believes that it is too late to micro-zone the position of national chairman  after more than eight aspirants have purchased the forms and are right now about to be screened by the Special Screening Committee.

“They should be allowed to test their fame through the election that is about to start on December 9-10.

“I want to assure our party members that whoever emerges as the national chairman, the BoT is ready to cooperate and work with him for the progress of the party. I will like to reiterate our position that the BoT has not anointed any candidates for now.”

He urged all contestants for different positions to develop the spirit of give and take, adding that they should accept the verdict of the delegates.

“They should all accept whoever emerges as the national chairman. They should continue to remain loyal to the party and accept that power comes from God. He gives it to whom He likes and takes it away from whom he likes and gives to whom he likes,” he stated.

Jibrin said the APC should be grateful to former ex-Vice-President Atiku for not tearing his membership card while leaving the ruling party for the PDP.

He said this was not so with former President Olusegun Obasanjo, who he said tore his PDP card when he left the former ruling party.

The BoT chairman urged others who defected from the PDP to the APC to return to the main opposition party.

Those he mentioned include the President of the Senate, Bukola Saraki; and a former Governor of Kano State, Senator Musa Kwankwaso.

Jibrin said, “As the party joyfully welcomes Atiku back to his home, the PDP, we are  waiting to receive more members of the APC, including Kwankwaso, Senators, members of the House of  Representatives, President of the Senate,  Senator Bukola Saraki, APC governors who had earlier left the PDP.

Thereafter, all of us will unite to take power from the APC come 2019.”

He also commended the judiciary for saving Nigeria and “democracy by coming with the Supreme Court judgment” that sacked Senator Ali Modu Sheriff as the PDP national chairman.

In a similar vein, a former Minister of Mines and Steel and chieftain of the PDP, Mr. Wole Oyelese, has said the Rivers State Governor, Mr. Nyesom Wike, and some PDP governors backing Secondus to emerge as the party’s national chairman are doing so for selfish reasons.

He warned the party leaders and delegates against falling into the trap of Wike and other governors by ‘imposing’ Secondus as the PDP chairman, adding that doing so would lead the party into a “disastrous crisis.”

Oyelese, who said this in a statement on Wednesday, noted that “Secondus leading the party is certainly a disaster in waiting to happen.”

He urged the delegates to help the party to avoid the disaster.

Oyelese added, “I will not expect anybody that loves the PDP to support Secondus because of his past record but there is a difference between loving the party and being selfish.

“Wike wants to build a political empire using the PDP as a platform, hence his support for Secondus. Some governors, who are also afraid of their shadows, believe that they cannot manipulate Chief Bode George and believe Secondus could easily be manipulated.

“Wike and the other governors are unnecessarily anxious. They are not thinking about the future of the party. They should know that there is no room for experiment.”

Oyelese also appealed to the PDP leaders in the South-South to see Nigeria as a country that must be united and not divided along any ethnic lines.

Speaking about the claim by Secondus that he had the best record among those aspiring for the office of national chairman, Oyelese challenged him to come out with details of his achievements.

He said as the organising secretary of the party, Secondus caused more division in the Oyo State PDP when he allegedly accepted three different results from three different groups during a congress.

He said in 2014, he allegedly imposed an unpopular candidate in the governorship election in Oyo State, leading to the PDP’s failure at the poll.

“Is that the kind of man that will lead a great party like the PDP or any other party for that matter? Anybody that could be so compromised should not be the chairman of PDP,” he said.

Meanwhile, a group within the party, the PDP Committee for Justice and Fairness, has called for the immediate removal of Dr. Sunday Onor, who has been nominated as the Secretary of the Convention Electoral Committee.

The group, in a statement on Wednesday and signed by its Chairman, Etim Nsikak, said Onor, who joined the party two months ago, “is an ally of Governor Nyesom Wike, who is openly backing Secondus for the chairmanship position.”

It added, “It is obvious why the secretary of a critical committee and its chairman are Wike’s allies. How do we get fairness and justice form such a committee?”