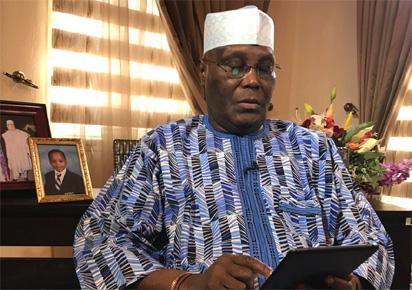 Also on her Facebook page she said: ‘have never known anyone so angry that President Buhari is still alive and looking well.

‘Even the usual culprits have accepted that fact and are licking their wounds inflicted on them by the army of supporters who believe in the Buhari administration.

‘It’s really unbecoming of a former number two citizen of our great nation and I mean Alh. Atiku Abubakar, to be fabricating tales by the moonlight to the effect that President Muhammadu Buhari was also barred from entering the United States of America. Such bare-faced liar!

‘What is he up to? What does he want?
In fact, I shudder to think what Nigeria would have become after Jonathan, had Alhaji Atiku Abubakar won (God forbid) the APC Primary that threw up President Muhammadu Buhari.

‘Nigerians are lucky to have escaped the leadership of this desperate man who calls himself a rebel and who went further to say he would not accept to be ruled. Yet he wants to rule by hook or crook!

‘President Buhari is a law abiding citizen. Leave him out of your inability to set foot on America. And hey, save your energy, Nigerians will not vote for a leader who cannot go to represent them at the United Nations in America. Not in 2019. Not in 2023. Not ever!’