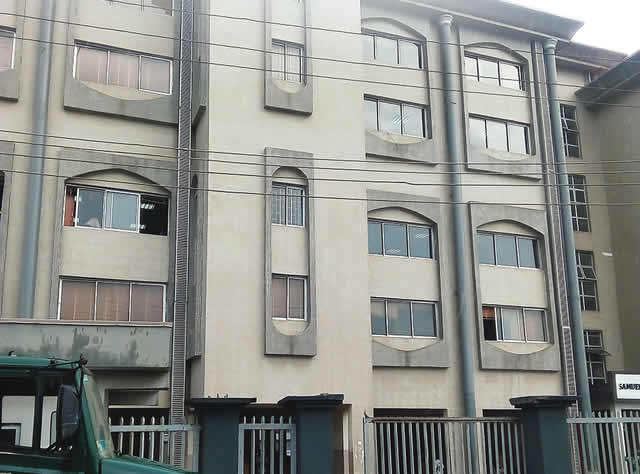 A welder, who was facing theft trial at Ogba Magistrate’s Court, Lagos, Wasiu Alowonle, has killed himself on the court premises.

Alowonle reportedly jumped from the window of Court 20, which is on the third floor of the four-storeyed building, crushing his head in the process.

PUNCH Metro learnt that the 41-year-old had been arraigned on October 16, 2017, for allegedly stealing iron rods worth N40,000.

He was said to have been granted bail in the sum of N20,000 with one surety in like sum.

He was subsequently remanded in the Kirikiri Medium Prison pending when his bail condition would be perfected, while the case was adjourned till Wednesday, December 6, 2017, for trial.

It was gathered that nobody came to the court to perfect his bail.

Some sources at the court, who spoke to our correspondent on Thursday, said the case had been stood down by the presiding magistrate, Mrs. O.I. Raji, when the defendant suddenly walked to the window and jumped down.

One of them said a court official, who noticed the moment Alowonle wanted to jump from the window, raised the alarm, while some warders rushed to stop him.

He had reportedly jumped down before the warders got to the window.

The source said, “He was arraigned on October 16, 2017, for stealing iron rods worth N40,000. He was admitted to bail in the sum of N20,000, but nobody came for him. The matter was slated for trial yesterday (Wednesday). He was brought from the Kirikiri prison.

“The magistrate called the case, but it was stood down. He just stood up suddenly and went straight to the window, which was open. Before we knew what was happening, he had jumped from the window. Attempts by the warders to stop him proved abortive. He landed on his head and died on the spot.

“The window was supposed to be shut, but the air conditioners in the court were not working. They have been fixed today (Thursday). I think the man was frustrated because his relations and friends abandoned him in the prison. There was confusion everywhere.”

A police source explained that Alowonle had been arraigned in Ikeja Magistrate’s Court a few months ago for another case of  stealing, noting that that case was struck out because the complainant did not appear in court.

“The incident is a suicide case. I can’t imagine what could have made him to kill himself,” he added.

It was gathered that officials of the Lagos State Emergency Management Agency removed the corpse and handed it over to the State Environmental Health Monitoring Unit.

The case was also said to have been reported at the Isokoko Police Division.

People were seen discussing the incident at different sections of the court during PUNCH Metro’s visit on Thursday.

A lawyer, who did not want his name in print, said, “The man jumped from the third floor. He was in the dock when he jumped. He slammed his head on the floor and died. Emergency officials confirmed him dead on the spot.”

The police prosecutor in charge of the matter and the court registrar declined our correspondent’s request for the charge sheet with which Alowonle was arraigned.

The LASEMA General Manager, Adesina Tiamiyu, could not be reached for comments.

But an emergency official said the incident happened around 12pm, adding that a distress call from the court indicated that Alowonle attempted to escape from the courtroom.

The Lagos State Police Public Relations Officer, SP Chike Oti, who confirmed the death, said the command had commenced an investigation into the incident.

He said, “The man was taken from the prison to the Magistrate’s Court in Ogba. He was charged with stealing. While the proceeding was going on, he jumped from the third floor through the window and died. His name is Wasiu Alowonle and he was arraigned before Magistrate O.I. Raji. We are investigating the incident.”