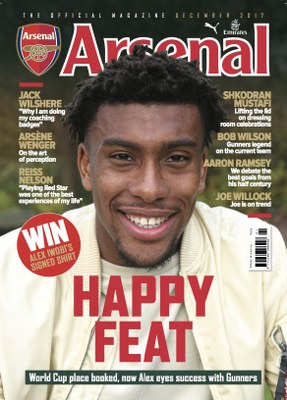 Arsenal forward Alex Iwobi has admitted that he needs to score more goals for the Gunners as they prepare for their Premier League clash at Southampton on Sunday.

Iwobi, who scored twice in Nigeria’s successful Russia 2018 World Cup qualifying campaign, has scored only once in 13 matches in all competitions for Arsenal this season.

Iwobi is also featured on the cover of the latest Arsenal magazine with a big feature inside on the Super Eagles star.

“I believe I’ve done okay so far, but I wish I could get more goals,” Iwobi told Arsenal’s official website.

“Goals win games and I’ve had a few chances, but overall I’m pleased with my performances. I would like to play a bit more, but I have to be patient as we have a lot of world class players in the team.

“Theo [Walcott] is one of the more experienced players and he would know how to go about doing this, he still motivates the team and puts in a good shift in training. I even look up to him at times, he tells me what to do and gives me advice. Everyone is there for each other, the chemistry is there.

“He brings goals, chances and is an attacking threat with a lot of pace and he’s one that can hurt defences, so he’s very important to the team.

“You don’t even need to watch Alexis and Ozil,” he added. “You just see the stats and what they bring to the game and for the team. They’re incredible for us and with them playing you always know we’re going to get a goal or a chance so it’s important for us to keep them fit and playing.

“Everyone is really happy for Jack [Wilshere] to be back, too. He’s had a lot of difficult times with injuries, but to be back playing and his full self and fitness, he’s very sharp, so we’re we’re all very happy for him.”