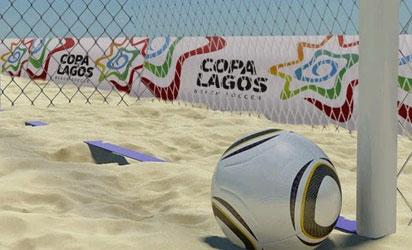 The stage is set for the kick-off of the 2017 edition of the most exciting beach soccer competition in Africa, Copa Lagos. The championship which will feature four national beach soccer teams and four clubs begins tomorrow at the Eko Atlantic,Victoria Island Lagos.

Speaking at the pre-tournament press conference yesterday, the Chief Executive Officer of Kinetic Sports, Samson Adamu said this edition had something special to offer the numerous spectators expected at the venue.

Apart from the exciting football action expected from the participating teams, Adamu said there will be plenty of music, dance and fashion. “There is so much to look forward to,” he pointed out. He also spoke on the partnership between Lagos state government and his organisation, adding that the partnership would make the tournament bigger and better this year.

Lagos State Commissioner for Information and Strategy, Steve Ayorinde said the state government aligned with Kinetic Sports in respect of the Copa Lagos because it falls within the policy thrust of Governor Akinwunmi Ambode who wants to see Lagos as the destination point for tourism. Said he, “One of the core campaign promises by his excellency is the use of sports as a tool for the promotion of tourism as he sees the creative economy as the new oil.”

He said that Copa Lagos was a perfect stage to showcase the other side of Lagos which is relaxation, fun and culture. To demonstrate government’s seriousness in this, the commissioner said, Governor Ambode would make a personal appearance at the stance during the tournament.

Reiterating the Governor’s resolve to make Lagos a tourist attraction, the Special Assistant to the Governor on Sports, Deji Tinubu said, “His Excellency wants people to google to fina a reason to want to come to Lagos. We want to use Cpa Lagos to create opportunities, create varieties and excitement and enhance the tourism potentials in Lagos,” Tinubu said.