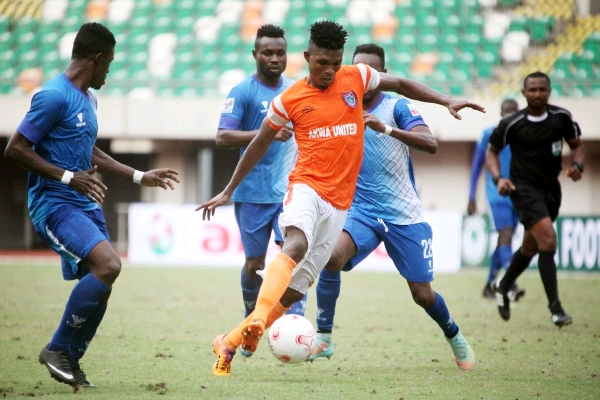 By Adeboye Amosu in Kano:Akwa United and MFM FC played out a 1-1 draw in their Group B clash in the Nigeria Professional Football League Super Six on Monday, reports Completesportsnigeria.com.

Adegboyega Adekunle scored the curtain raiser for MFM, nodding home from a corner in the 56th minute, while Ajibola Oteybeye restored parity for Akwa United 10 minutes later from the spot.

MFM FC who finished in the second position in the NPFL last season were forced to name only three players on the substitutes bench as they are yet complete registration of some of their players ahead of the new season.

Both teams sized each other up in the opening exchanges as they struggled to create any meaningful chance.

Akwa United had the first real chance of the game a minute before half time but Chigozie Chilekwu blazed wide with only MFM goalkeeper Folarin Abayomi to beat.

Otegbeye missed another opportunity for Akwa United two minutes later when he fired at Abayomi from a good position.

Play was delayed for a few minutes early in the second half as engineers at the stadium battled to put the floodlights on.

However despite playing second fiddle in the game, it was MFM who shot in front four minutes before the hour mark when Adekunle nodded Chukwuma Onuwa’s cross past Akwa United goalkeeper Emmanuel Iwu.

Parity was restored 10 minutes later when Otegbeye won a penalty which he duly converted.

The last chance of the game fell to Onuwa whose well-struck shot inside the box was saved by Iwu.