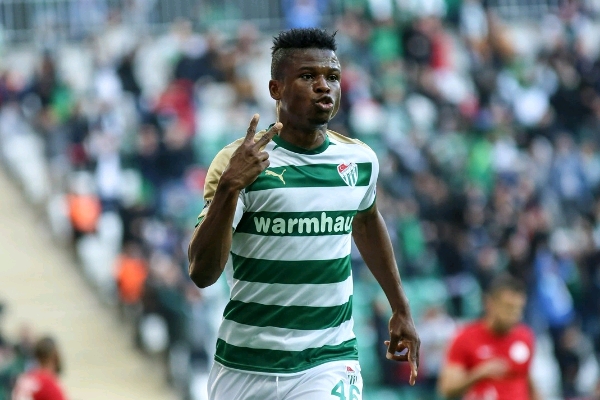 By Johnny Edward: Bursaspor midfielder, Mikel Agu, could be back in first team action in a fortnight following his returned to light training with his club on Thursday, Completesportsnigeria.com, reports.

The 24 year old defensive midfielder underwent an arthroscopic menisectomy surgery on his right knee in November. He took part in some sprint exercises at the club’s training ground on Thursday which will continue on Friday, the player has revealed.

“I have started running and hopefully, in a couple of weeks, I will be back with my team again,” Agu told Completesportsnigeria.com.

“I have been working hard to get fit again, and hopefully, you will see me back in action soon, by Gods Grace.”

Prior to his injury the Nigeria international was in great form for Bursaspor, scoring twice in 11 appearances this season.

The former Club Brugge of Belgium and Vitória Setúbal of Portugal player missed Bursaspor’s last four games against Goztepe, Karabukspor, Adanaspor, Konyaspor, and he is expected to watch from the stands, their Friday’s clash with Fenerbahce.

A return next weekend against Trabzonspor on the 16th of December looks unlikely however as he is still gradually regaining fitness.

Agu has made four international appearances for the World Cup bound Super Eagles of Nigeria.