So Friday morning came and the main headline of the day was the Draws to determine the groups in which host Russia and the other 31 teams were going to play when hostilities kicked off at the World Cup next June.

But, just before that, there were other programmes lined up by the LOC for journalists covering the Draws. One was a tour of the Luzhniki Stadium, billed to host the opening and final games of the World Cup.

A bus was put on standby at the Ibis Hotel, FIFA’s designated hotel for participating media but I was lodged at the Arbat Hotel, some kilometers away. So I decided to catch up with the group at the Stadium rather than at the Ibis which would have meant me going in a backward direction.

With the aid of a city map, I easily located my train station and also changed trains as I navigated the cold Moscow streets all by myself.

I finally teamed up with the group at the Luzhniki even though the stadium tour was well underway. Truly, I must confess, the stadium is breathtaking. Having missed out on the opportunity to play any of their group games in this beautiful stadium, one can only pray that the Super Eagles do well and get to the semi-finals and finals to stand the chance of having a feel of the Luzhniki pitch.

It will be a dream to sit in the media tribune of the Luzhniki Stadium and watch as Nigeria lift the FIFA World Cup on July 14. Yes, we can!

Sooner than we wished, the stadium tour was over and we had to return to the FIFA Media Centre for a Talk Show with FIFA President Gianni Infantino and Russian deputy prime minister Vitaly Mutko.

INFANTINO IS NO SHRINKING VIOLET 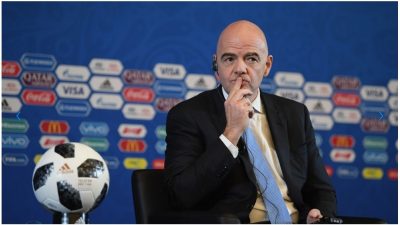 Looks, they say, can be deceptive and I think the FIFA President comes across as someone who’s timid and facetious, even susceptible to being pushed around. No hard facts but that’s just the impression I had meeting him in the flesh for the first time.

However, an incident happened at the event which brought out the no-nonsense side of Infantino. Now, the English journalists at the event sat together in one group even though they represented different media outfits. You can’t blame them for that, though. You know how you fraternize with people you are very familiar with when you find yourself in the midst of strangers.

However, in my opinion and I guess that of many others, they constituted themselves into a nuisance with their standoffish attitude and feeling of superiority. They carried themselves as if better than the rest and like their presence was a favour to the Russians.

Obviously the FIFA President also noticed and initially kept his cool. Then when he couldn’t bear it again, he pounced on a question thrown by one of the British journalists at Mr Mutko, the deputy prime minister.

The question was, to paraphrase, about the impending IOC ban on Russian athletes from participating at the Olympics and how that was going to affect the FIFA World Cup in 2018.

Infantino, sensing an opportunity to put the journalist in their proper place, seized on that question and insisted on answering. I was a safe distance from the podium but I could see that his eyes were furiously darkened by rage but, admirably, he was able to conceal it.

First, he patiently explained to the errant journalist that the IOC and FIFA are two different bodies without overlapping authorities and that there was no way the decision to ban Russian athletes from the Olympics was going to stop or affect the World Cup. There was pin drop silence in the hall. It was as if a three-year old boy was being lectured on the merits of being good.

Then, to add salt to injury, the FIFA boss now remonstrated with the journalists to drop their I-too-know airs because Russia was not in anyway inferior to them.

He added: “Some of you have carried on as if anything that has to do with Russia or any other country outside your own cannot be good enough. I can assure you that the 2018 World Cup will be the best ever, just as Brazil 2014 was the best when it held.”

I’m not sure Russia would get a better PR than that, especially one that was not paid for.