What should have been an uneventful departure to Russia for the 2018 FIFA World Cup Final Draws turned out to be a last minute frantic dash to Abuja and a three-day vigil and wait for my Russian Visa owing to an unforeseen incident. At a point, it looked as if the trip was going to be aborted but I have learnt never to underestimate the powers of a determined man.

My Group Managing Director, Alh. Mumini Alao, never one to succumb to adversity, practically moved mountains to ensure that Complete Sports was live at the Kremlin Palace in Moscow to bring behind the scenes news and gists to our readers back home.

There were huge clouds over the possibility of getting a visa on time on my first visit to the Russian Embassy in Abuja, same day I got my lost international passport replaced by the Immigrations Service.

I had gone to the Maitama office of the Embassy, as advertised in the FIFA correspondence sent to me only to be told that the Embassy had moved to its permanent site somewhere in the Central Business District. I chartered a cab, which cost me an arm, and headed for the new location but by the time I got there, they’d closed for the day and I had to go back the following day. Saying I was disappointed was an understatement.

I was back at the Embassy at 8.45am and entered as the first visitor of the day at 9.09. I don’t know what higher forces were at work on my behalf but I walked out of the Embassy at 9.17, yes nine minutes later, clutching my visa in my right hand! Yea, I was surprised it could be that smooth because another guy came in while I was there to enquire if his Visa, which he applied for four days earlier, was ready. It wasn’t. Mine was. Processed and ready in just nine minutes.

Long story short, I came back to Lagos and started preparing for my trip. Hotel accommodation sorted and flight tickets procured, I was finally ready to fly. My itinerary was to take me from Lagos through Istanbul, Turkey and finally to Moscow, Russia.

At the departure lounge of the Murtala Muhammed International Airport, I did a short video to inform our readers at www.completesportsnigeria.com that I was on my way and to whet their appetite of what to expect from Russia.

I ran into my colleagues Lolade Adewuyi and Chisom Mbonu and, as it happened, we were the only Nigerian journalists at the draws, to the best of my knowledge. It wasn’t my first international trip with Lolade. We were in Addis Ababa together in 2013 when the Super Eagles played Ethiopia in the final qualifying fixture for the 2014 FIFA World Cup. On that occasion, Nigeria won 2-1.

Flight to Turkey was smooth as we arrived in the early hours of the following day and, after a two-hour wait, we changed planes and flew into Moscow, the Russian capital.

I had been warned of the Russian weather at this time of the year by Lolade, who had schooled for a year at the International Olympic University in Sochi but nothing prepared me for the blast as we came down from the aircraft into the airport shuttle bus. That was not just cold, it was freezing. Wow!

We disembarked at the Vnukovo International Airport and hitched a ride in Chisom’s cab to her hotel, alighted and made the short distance to Lolade’s hotel where we dropped our luggage.

Five minutes later we were back on the street and on the metro train to the famous Red Square (or the Revolution Square as fondly called by locals), where the Local Organizing Committee had set up headquarters for our media accreditation. The process was smooth but thorough and in less than five minutes, I had my tag dangling from my neck. 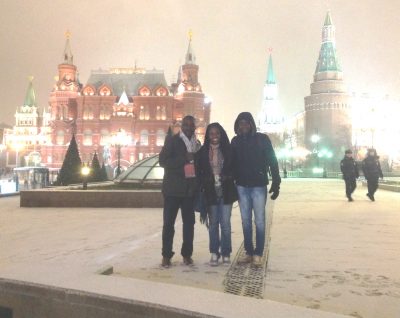 (R-L) Lolade Adewuyi, Chisom Mbonu and myself at the famous Red Square

The first glimpse I had of Moscow was on the way from the airport and to say I was pleasantly surprised about the modernity of the Russian capital would be putting it mildly.

Don’t blame me. If you’d read as many spy novels and Nick Carter thrillers as I did while growing up, you’ll understand my surprise. Moreover, as a Political Science major during my undergraduate years, I read many textbooks as we compared political systems and the Cold War era. Unfortunately, I was exposed to only Western authors who painted the former USSR as a big bad bully not able to feed itself with decrepit infrastructure.

In my mind’s eye, that was the picture of Russia that I had as we flew into Moscow but, to my shock and surprise, what I saw in my stay there was a far cry from the labels pasted on Russia by western propaganda.

Instead of a failing state where nothing works, Russia (or at least Moscow where I was based) is a modern European city with working infrastructure and breathtaking architecture. The skyline over the Red Square as well as you travel from one district to another will knock off whatever preconceived impressions you had coming to the country.

The cold was unrelenting. To be sure, this was not my first trip out of the country or to Europe for that matter, but Russian winter is in a class of its own. When it appeared as if my earlobes were about to be cut off by the whipping wind, I had to fork out a princely 750 roubles (about N4600) to buy the winter hat. This was in addition to my heavy jacket and hand gloves. The weather dropped to -8 degrees sometimes during my stay. It was that scary.

As I boarded the metro back to my hotel that first night, the words of the cab driver who ferried us from the airport kept ringing in my head.

He said: “Welcome to Moscow. My name is Dmitriy and I’m from Georgia. Russia is safe, very safe.”

In the days that I spent, that feeling of security clung to me like an after-shave cologne. You didn’t see gun-toting policemen on the streets but somehow you feel that you’re secure from harm.

TOMORROW: DRAMA AT THE FIFA DRAWS AND OTHER STORIES