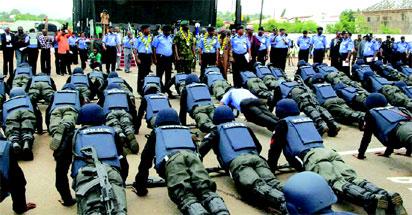 …They demanded N1m from him; threatened to label him a robber—Victim’ lawyer

LAGOS—The team of policemen that allegedly handcuffed and bundled a Lagos hotelier into the boot of their vehicle from Apapa to their base in Ikorodu area of the state, have been arrested.

The policemen attached to the Zonal Intervention Unit, Ikorodu, stormed Formula 2 Hotel and Suites in Apapa area of Lagos recently, to effect the arrest of its owner, Mr. Obimdi Ocho, over claims that his guards were found with guns.

In a petition to the Inspector General of Police, Idris Ibrahim, lawyer to the victim, Dan Okoro, alleged that the policemen placed a gun on the victim’s hand, took a shot of him and, thereafter, demanded for N1 million.

According to the lawyer, the officer told the hotelier that if he doesn’t come up with the amount, the pictures will be released to journalists.

The petition, entitled Complaint Against Supol Salawu of Zonal Intervention Unit, Ikorodu, for Professional Misconduct, Misuse of Police Power, Extortion and Incivility to Members of the Public, further stated that the policemen threatened to brandish the victim as a robber if he failed to part with the demanded sum.

The petition read: “Our client has briefed us that on November 24, some policemen bashed into his hotel complex in a commando style and when our client came out to meet them, they told him that they had information that his private security men in the hotel were armed.

“Our client told them that the arm he had has a licence and it was shown to the policemen.

“However, our client was informed by the policemen that the Pump Action gun does not have a licence, but our client informed them that when the gun was bought, he took it to Ikeja, where the said gun was issued a licence in the year 2015.

“When our client was questioned about using a gun in the hotel, he told them that cultists were always disturbing his customers and members of the public, dispossessing them of their belongings.

“He said cult boys usually come to the hotel to engage the guards in fights, injuring them in the process. One of the cases was reported at Trinity Police Station, where the cultists were arrested and handed over to Federal Special Anti-Robbery Squad, FSARS, from where they were charged to court.

“One of the security men, Cyril Nwachukwu, was also arrested and taken to their office without dropping their address or phone number. Our client quickly ran to Trinity Police Station to inform them of the situation.

“But he was told that the policemen were from the Zonal Intervention Squad, Ladegboye, Ikorodu.”

Vanguard gathered that the IGP forwarded the petition to Zone 2 Command, Onikan, with a directive to fish out the policemen involved and investigate their culpability.

As at Friday, Police sources at Zone 2 Command told Vanguard that four policemen, who were involved, had been apprehended.

When contacted, the Zonal Public Relations Officer, Dolapo Badmus, confirmed the arrest and disclosed that the policemen involved were being investigated at the X Squad section of the Federal Criminal Investigation Department, Alagbon, Lagos.