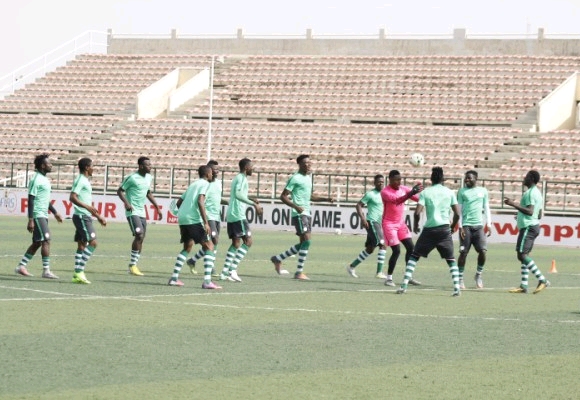 By Adeboye Amosu in Kano: The home-based Super Eagles had their first full training session ahead of their first game of the Nigeria Professional Football League Super Six competition on Monday morning at the Sani Abacha Stadium, Kano with 26 out of the 30 invited players in attendance, reports Completesportsnigeria. com.

The four players who are still expected in camp are Kalu Orji, Gabriel Okechukwu, Ifeanyi Ifeanyi and Austin Oladapo.

Katsina United’s Destiny Ashade was the only player who did not train with the rest of his teammates due to a small knock he picked up in a pre-season game for his club.

Also still expected in camp is goalkeeper trainer Alloy Agu who is expected to hit the team’s Tahir Palace Hotel base later on Monday.

The training session which lasted for about one hour 30 minutes was supervised by head coach of the team Salisu Yusuf and his assistant Imama Amapakabo.

The home-based Super Eagles will take on NPFL champions Plateau United in their first game of the competition on Wednesday at the Sani Abacha Stadium, Kano.

The team is using the competition to perfect strategies for the African Nations Championship in Morocco which kicks off in Morocco next January.